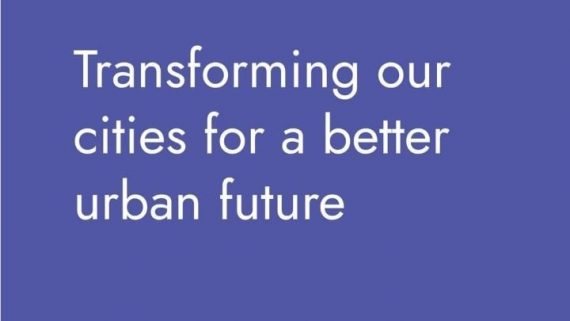 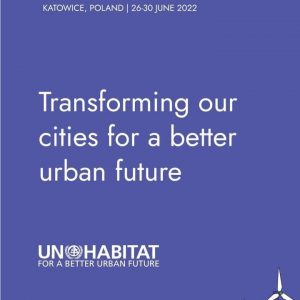 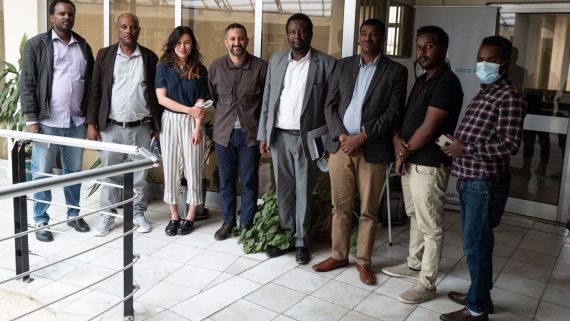 A crew from Mayors Migration Council has met all stakeholders implementing the GCF project in Addis
Ababa on 21.03.2022. The agendum was to discuss about the project’s implementation status, and to
decide the adequacy of the fund allocated for the proposed project. During the stakeholders’ meet, key
decision was made with regard to the implementation of the construction of septic tank and sewer lines.
In the decision process, the representatives from Addis Ababa Fire and Disaster Risk Management
Commission, the Addis Ababa Water and Sewer Authority and the Addis Ababa City Job Enterprise and
Industry Bureau have been participated. As a result, the implementation of the construction of septic
tank and sewer lines was waived since the budget was not sufficient. At the same time, the team has
jointly approved that the proposed fund be used only for the provision of clean water and for the
improvement of IDP’s livelihood initiatives. Moreover, the crew has visited the project site and held a
fruitful discussion with the community representatives and the IDP. The implementing institutions also
pledged to make all institutional arrangements to complete the project effectively and efficiently before
the end of the project life. 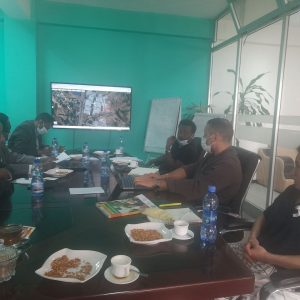 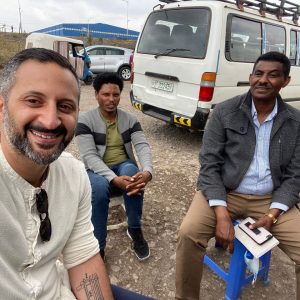 Workshop on awareness creation has been conducted
in
Latest NewsNews 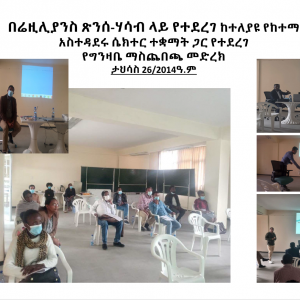 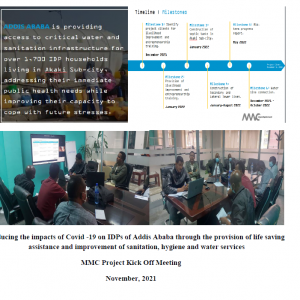 Addis Ababa City Administration has got a fund equivalent to 174,000.00USD under the Global Cities Fund for Inclusive Pandemic Response Initiative from the Mayors Migration Council. The fund will be used for livelihood improvement and entrepreneurship training, construction of septic tank, sewer and water lines to support migrants and internally displaced people settled around Akaki Sub-City. The project owner is Addis Ababa City Fire and Disaster Risk Management Commission. The Addis Ababa Job Enterprise and Industry Development Bureau is in charge of implementing the livelihood related initiatives, while Addis Ababa City Water and Sewer Authority is responsible to implement the construction of septic tanks, secondary and lateral sewer lines as well as water lines. The project is a one year project which will be closed on October 2022. The project is officially launched by the Mayor’s Office. The preparation of site plan, the design and specification for the construction activities is undergoing.  The Mayors Migration Council is closely monitoring the implementation process together with its strategic partner and the City Government. The project will benefit households ranging from 1200 to 1700 upon its completion.  The success of the project relies on the commitment of the implementing agencies and the timely support given from the Mayor’s Office.

The Feasibility Assessment is the first step in a well-defined project cycle of designing, capacitating, and establishing a prospective Water Fund. It is a critical step in informing the key stakeholders whether to invest in the next steps of the process.

A Water Fund for the Addis Ababa City and key watersheds in the Oromia Region could play a key role in the water security challenges facing the area. A Water Fund could make a transformational contributions to Developing a shared and feasible vision of Water Security needs that creates cohesive water-related decision making, and Offering an attractive vehicle for pooling a multitude of resources to ensure the continuity of investment to protect and conserve water resources.

The Feasibility Phase has two primary objectives, firstly, to determine if a Water Fund is an appropriate and feasible mechanism to improve water security for the citizens of Addis Ababa, in partnership with Oromia Regional State. Next, is to recommend whether to proceed with the water fund design and other stages.

Based on this the Assessment Concluded that water fund is appropriate to solve water security in Addis and the designing and creation phase is on plan to start.

Climate Change and Environment Commission said it will introduce seven additional new air quality monitoring stations in the capital city next month.
Air Pollution Monitoring and Control Senior Expert Meseret Abdissa told journalists that   Ethiopia, with a population of more than 100 million, has only seven monitoring stations in Addis Ababa, Hawassa and Adama.

Yet, some of those are dysfunctional and the number of the air quality monitoring stations is low, he revealed.

The senior expert stated that more than 50,000 persons die from diseases related to air pollution in Ethiopia.

The major sources of pollution in the country are biomass fuel, vehicles emission, poor quality fuels, poor solid waste management, pollution from industries and construction, it was learned.

UNEP representative to Ethiopia, Samba Haroma said the economic cost of air pollution is over 750 billion in Africa, while it is 114 billion USD in Sub-Saharan Africa.

A consortium of three companies sealed a 126.9-million-Br deal to develop a comprehensive transport and traffic management plan for Merkato.

Two German companies and one local firm initiated the study to design and implement the traffic plan last month under a contract awarded by the Addis Abeba City Roads Authority. The project, which aims to alleviate traffic congestion and enhance the safety of pedestrians, is financed by the World Bank Group.

Gauff Ingenieure and PB Consult, which have been engaged in road infrastructure design and construction for more than two decades, are the two German companies involved in the project. Alert Engineering Plc, a seven-year-old consulting firm that works on road and bridge construction, as well as transport and traffic management activities in the capital, is the local partner.

The project covers 1.1-square-kilometre area and encompasses the area between Fitawrari Habte Giorgis Street in the north, Central African Republic Street and Dejazmach Mekonen Demisew Street in the west, Uganda Street in the south and Tesema Aba Kemaw Street in the east, following the Addis Light Rail route.

The project is set to improve pedestrian and vehicular mobility and expand parking provision and public transport, according to Moges Tibebu, director general of the Addis Abeba City Roads Authority, owner of the project.

Walking is the main mode of mobility in the capital and accounts for an estimated 70pc of trips, followed by public transport at 26pc and private motorised transport at four percent.

Even though the proportion of pedestrian deaths has dropped from 82pc to 76pc in the past year, pedestrians still make up the overwhelming majority of fatalities, according to the 2018 report by Bloomberg Philanthropies Initiative for Global Road Safety.

The City Road Transport Bureau is implementing the project, while the city’s Traffic Agency is the beneficiary.

“The design will solve the traffic congestion of the area,” Behailu told Fortune.

Merkato, which literally mean “marketplace” in Italian, is the largest open market in the country and is known for having overwhelming business and traffic activity in the city. The latest data from the Addis Ketema district shows that the district where the marketplace is located has a  population of 271,644.

A transport management lecturer thinks that the design by itself cannot solve the problem.”To alleviate the congestion, additional remedies are needed,” Berhanu Zeleke (PhD), who has worked at Kotebe Metropolitan University’s Department of Urban Transport Management for over two decades, said. “Constructing overpass bridges and cable cars can be options.”

A month ago the City Road & Transport Bureau already started the design of an Intelligent Transport System Master Plan, an integrated program for traffic management and pedestrian safety, with 600 million Br in financing from the World Bank.

Prime Minister Abiy and President Sahilework, mingling with thousands of residents of Addis Ababa, were seen picking up litter outside the National Palace in the streets of the capital on Sunday.The initiative aims at creating clean, safe, healthy and economically sustained Ethiopia for generations to come.

Police officer, Emebet Derbe, stated that she and her colleagues are more than committed to pursue such initiative that would help the city clean and healthy.It is not only cleaning the country’s rubbish but also thinking of get rid of negative attitudes from within ourselves, she added.

Besides, it helps to bring all sorts of the society to a strong unison and solidify unity in different national matters, she added.Mentioning that police is part and parcel of the society, Emebet urged the public to work in similar caliber of unity to maintain peace and order as well as preventing crime.

Feven Gosaye, who is a resident of Addis Ababa, said the cleaning campaign is crucial as it came at the call of Prime Minister Abiy Ahmed to keep clean the city and real public attitude towards hatred.“I would be glad to do this every day, cleaning our surrounding in the morning and going to our jobs with a clear conscious is the source of greater happiness and I would love to it,” she confirmed.

Bzuayehu Brhanu, another participant in the campaign pointed out that she took part in cleaning Ethiopia since it is a national call and benefits every citizen.She added that all the people in unison and sense of togetherness have come out of their homes and cleaned the surrounding.

Appreciating Prime Minister Abiy’s clean initiative campaign, she confirmed that the general public stands by his side in all aspects.

Ethiopia has created jobs to more than 2 million people in the last nine months and needs to double the figure to meet the growing number of unemployment, National Job Creation Council stated.

Of the total jobs created about 1.08 million are in rural and 1.03 million in urban areas.

Chairperson of the Council and Deputy Prime Minister Demeke Mekonnen said the ongoing comprehensive reform can only be realized if it successfully ensures development that benefits the youth.

Due attention should be given to job creation as it helps address public demands, he said, adding that immediate and tangible results are needed in this regard. “We have to break the snail’s pace,” Demeke stressed.

Speaking of the 10-billion birr revolving fund disbursed to the youth earlier, the chairperson noted that “joint collaboration is crucial to recover the money from defaulters and revolve it to facilitate job creation and poverty reduction.”

The construction sector is reportedly at the forefront in contributing 29 percent of the jobs, followed by the service sector by 27 percent in urban areas.Jobs Creation Commissioner Ephrem Tekle said on his part that the country should create over 3 million jobs in 2012 Ethiopian fiscal year in order to meet the growing unemployment and realize its vision of poverty reduction.

Unemployment is growing even if the number of government employees has doubled over the last seven years reaching 1.64 million.“We are only meeting 1/3rd of the prevailing unemployment number and we must double our efforts to fully respond to that,” the commissioner added.

According to him, agricultural productivity especially horticulture, community inclusive tourism, manufacturing, and creative arts industry are sectors that can absorb large number of job seekers.Commissioner Ephrem pointed out that agriculture alone is expected to create over 5 million jobs in the coming 5 to 6 years.

In order to bring immediate change in job creation, he said, revising the fundamental policy and applying all the necessary measures set to ease doing business are worth mentioning.Moreover, he stated that the commission is working in collaboration with other pertinent institutions towards aligning the education system and available job opportunities.Ethiopia has more than 10 million unemployed citizens, it was indicated.